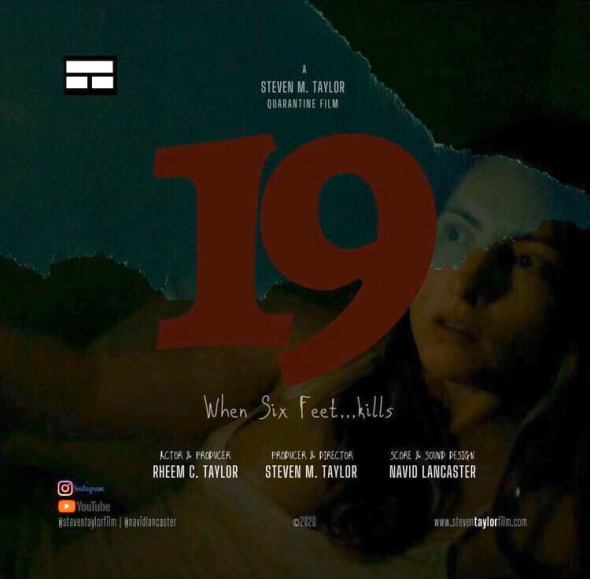 “19” is the first quarantine horror short film from Trinidadian filmmaker, producer, screenwriter, special effects make-up artist and fellow UWI St. Augustine Film Programme colleague Steven M. Taylor. With a midnight premiere on April 12th, “19” was released amidst two genuinely inspired efforts at providing entertainment during this distressing COVID-19 pandemic. The first was the latest edition of the Instagram Live hip-hop event series “Verzuz” where two legendary East Coast producers (DJ Premier & the RZA) did friendly DJing battle from the comfort of their respective residencies. The second was the NBC TV special “Saturday Night Live at Home” which was presented as a standard episode of the long-running SNL sketch comedy series, but with everything being filmed from the homes of the cast members, presenter (a coronavirus-recovered Tom Hanks) and musical guest (Chris Martin).

I bring these up not in an attempt to compare a DJ battle and sketch show with a 3-minute short film, but to emphasize the innovation and simplicity that went into all three. YouTube, Instagram, Twitch and Zoom, among other online platforms, have not only given creatives more venues to make and promote content, but presented bigger opportunities for them to connect with a wider audience. Soundstages, music venues and exterior filming locations are currently replaced with living rooms, backyards and bedrooms (more on that in a bit).

Steven is no stranger to exploring the dark side of human nature in his films, whether it be the TT Film Festival award-winning short “Buck: The Man Spirit” or the recently-released music video for soca artiste Erphaan Alves’ “Soca Global”. And even with its home-quarantined backdrop, “19” is no different.

The story involves a young woman named Rose (played by Steven’s wife Rheem C. Taylor) who, late one night, receives a series of messages on her phone from a supposedly-unknown sender. She plays one in her bedroom, and we hear a creepy male voice on the other end expressing needs for Rose, avoidance of quarantine and a ‘place to hide’. While I wouldn’t ruin what happens next, what I can say about “19” is that it does everything a horror short film should do: present a familiar scenario, albeit in a macabre fashion, introduce a mysterious, usually malevolent, presence into this scenario, have a relatable character to root for and to project our fears onto, build just enough tension through music, dialogue (or lack thereof), sound and visuals, and of course, deliver a terrifying payoff that will linger with viewers long after they’ve seen the film.

Utilizing an iPhone 8, flashlight and mobile selfie light, Steven incorporates underexposure and spotlighting to great effect in “19”, making its darkly-lit bedroom setting more unsettling than it actually is. The frightening tone of the film is amplified by its fantastic sound design and spooky musical score (both provided by Trinidadian musician/composer/producer Navid Lancaster), Rheem’s captivating performance and some appropriate …..ahem……’special effects’.

After my second viewing of “19”, I was instantly reminded of a 2013 horror short which not only matched the criteria I just mentioned, but eventually became a commercially-successful, full-length feature: 2016’s “Lights Out”. As a fan of both the short and feature, I won’t be surprised if the Taylors were inspired by “Lights Out”, mainly because of how inexpensive, simplistic and incredibly effective the original film was. And I’ll confess: off its effectiveness alone, I would love to see the story – and dare I say, THREAT – of “19” explored even further in a movie! (It should be noted that the role of actress Lotta Losten, the wife of “Lights Out” writer/director David F. Sandberg, in the short film is similar to that of Rheem’s in “19”)

Among the many quarantine-associated thoughts on my mind, I did contemplate the possibility of Caribbean filmmakers writing, producing, directing and DISTRIBUTING content during this pandemic. Of course, this content could be expanded into more fleshed-out, bigger-budget projects in the near-future, but to me, what matters is the distribution. Not only reaching out to a wider audience, but giving people a healthy distraction from what’s currently going on in the world.

Thankfully, Steven (currently in Trinidad with Rheem) achieved this with “19”. It’s a concise, entertaining story, executed brilliantly and distributed to the world via YouTube. If you’re a fan of horror and low-to-no-budget film productions or if you simply want to be entertained for a few minutes, you should definitely give “19” a look. Hopefully, it’ll inspire you to use your talents and resources to provide value in these troubling times and in the process, put a smile on someone’s face. Or a chill down someone’s spine.

OVERALL RATING: Decent to strong 4 out of 5 stars.

Waz d scene, people?! I'm Matthew. In the isle of Trinidad, born and raised. Inside a movie theater is where I spend most of my days (Saturdays and occasionally on weekdays to be exact. I DO have a life!). Fueling my passion for movies and filmmaking at a young age to the point that I decided to express this passion through movie reviews. Now I have my very own blog (established since 2011), a Soundcloud podcast and a YouTube movie review series entitled "¿Waz D Scene?"

Error: Twitter did not respond. Please wait a few minutes and refresh this page.